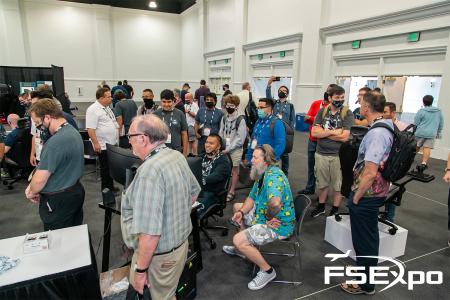 HOUSTON – Flight Simulation Association (FSA) is excited to announce the 2023 dates and location of FlightSimExpo! The next event will take place June 23-25, 2023 at the Lone Star Flight Museum in Houston, Texas.

FlightSimExpo is one of the world’s largest dedicated flight simulation conferences and tradeshows. The event has welcomed more than 3,500 attendees to events in Las Vegas, Orlando, and San Diego since 2018. Following the success of the hybrid model in 2021, the upcoming show will again feature options to attend in-person in Houston or watch a livestream of the presentations and announcements from anywhere in the world.

In 2023, the in-person component of FlightSimExpo will be held at the Lone Star Flight Museum at Ellington Airport (EFD). The 130,000 square foot museum and learning center has ample space for more than 2,000 attendees across two air-conditioned hangars. The facility is also home to the Texas Aviation Hall of Fame and multiple aviation learning exhibits, including certified Redbird flight training devices that will be available to attendees.

“We couldn’t be more excited about this year’s venue,” says organizer and FSA co-founder Phil Coyle. “It’s the perfect backdrop for the FlightSimExpo exhibit floor, and a fantastic city for aviation and aerospace fans like us!”

Saturday, June 24 and Sunday, June 25 will be at the Lone Star Flight Museum. Nestled amongst warbirds, fighter jets, and drones, attendees will find hands-on flight simulation exhibits where they can try the latest in flight simulation software and hardware. Speaker rooms will feature how-to seminars, educational discussions, and announcements from some of simulation’s biggest developers. As in past years, the Friday will feature an add-on series of group discussions before the main event on the weekend.

The museum is a 15-minute drive from Hobby Airport (HOU), 35 minutes from Intercontinental (IAH), and about 15 minutes from nearby attendee hotels. Located on Ellington Airport (EFD), the museum also has airside access, which will allow attendees to fly their own aircraft to the event for the first time. The area is one of America’s largest aerospace hubs: Houston is a hub for two major airlines, NASA’s Johnson Space Center, Space Center Houston, and more. As in past years, discounts on hotels, airfare, rental cars, and more will be available to attendees.

“Save the dates, start thinking of plans, but please don’t lock your travel in just yet,” says FSA’s Evan Reiter. “As always, we are working with area hotels, airlines, rental car options, and attractions to secure discounted rates for our attendees. We’re expecting awesome, add-on experiences at NASA, air traffic control facilities, and more – and you’ll want to have that full picture before you start booking.”

More information about hotel options, attractions, and travel will be available later this year. Registration for attendees and exhibitors begins in December. As North America’s community-driven flight simulation conference, organizers invite the community to share their ideas, feedback, and suggestions for the show. Visit www.flightsimexpo.com for contact information or subscribe to the mailing list for registration updates.

About FlightSimExpo. FlightSimExpo is one of the world’s largest dedicated flight simulation conferences and tradeshows. The event has welcomed more than 3,500 attendees to events in Las Vegas, Orlando, and San Diego since 2018. FlightSimExpo is produced by Flight Simulation Association, a community-driven organization of developers, simmers, and real-world pilots working to make it easier to get started in home flight simulation. Join the community today—free—at www.flightsimassociation.com for resources, learning content, webinars, and discounts on top add-ons and simulation hardware.